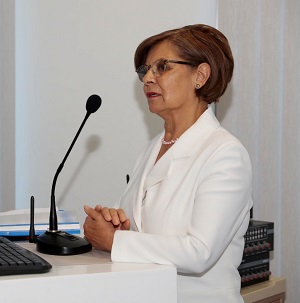 Established to enable children to get acquainted with the world of science at an early age and to develop scientific thinking and scientific process skills, the Özay Günsel Children’s University commenced its educational services in June, 2019 and it was announced that the end of the academic year of 2019 will be done with a closing ceremony which will be honoured with the attendance of First Lady, Meral Akıncı, wife of his Excellency, President of the Turkish Republic of Northern Cyprus, Mustafa Akıncı.
According to the press release issued by the Directorate of Press and Public Relations of Near East University, the first graduates of Özay Günsel Children’s University will be given at a ceremony which will be held on Friday, 9th August 2019 at 9:30, at Near East University Atatürk Culture and Congress Centre. Furthermore, it was also announced that the first students of Özay Günsel Children’s University, who were in four groups as the Universe, Earth, Sun and Galaxy, will be putting on different shows.

Prof. Dr. Meriçli: “We are sending away our children who are happy and who had fun while learning!”
Prof. Dr. Filiz Meriçli expressed that Özay Günsel Children’s University was established with the vision of introducing the university environment and spirit to the children at an early age, instilling the consciousness of being a scientist and developing the sense of scientific curiosity that exists in them. She also added that they were rather excited and pleased to be giving the first graduates of the Özay Günsel Children’s University.

Rector of Özay Günsel Children’s University Prof. Dr. Meriçli further asserted that this university was the first and only of its kind on the island and that they were very happy since they are proud as they had achieved their aim which was to educate children who enjoyed exploring and learning.

She said: “Our students recognized many professions and technologies on site. We undertook the task of assisting students in revealing their talents in various fields such as academia, science, technology, sports and art. The children participated in courses, workshops and seminars, scientific activities, nature-cultural excursions, exhibitions and applied learning activities and we are currently making preparations to say farewell to them. I would like to congratulate our children whom I am sure will achieve great success in their future lives. We will be keeping a close eye on them.”